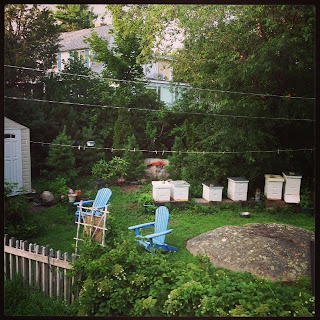 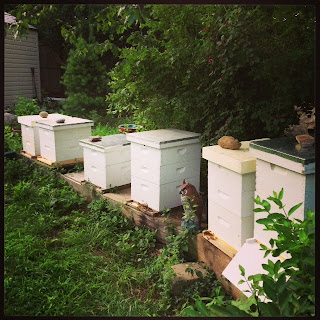 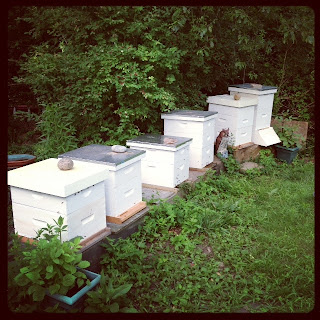 Transfered some brood Frames from my two strong hives on right to hives on left. transfered a queen cell frame I found into the weaked middle hive which I think lost it's queen and was being robbed for several days. I reduced the size of the entrance and took off the top entrance. I had watched the hive being robbed but really didn't know what I was looking at as I have never had a robbing situation in my bee yard before. Bees were hovering madly around the hive and not coming in with pollen. They were just coming and going quickly. I decided to cut down the entrance to the hive by stuffing grass into it. This way a few bees could get in and out and it makes it easier for the guard bees to defend the hive. I took off the top entrance and I also took off the top super. I put a queen cell and some brood on a frame into the hive and I am hoping this straightens out the problem. Apparently I had a swarm and lost my queen. Could be that the queen that was left in the hive after the swarming never got going. If I ever have a situation like that again I am going to go in and take out some of the brood frames before the swarm and divide the hive. It was very congested in the hive and I could have done some more checker boarding earlier in May to prevent this situation. After reading Michael Bushes advice about transferring brood frames out of strong hives into weak hives, I am going to do this for a few weeks on the 3 weaker hives I have. I just keep remembering that I am working to help the bees and give them the tools they need to survive well. Cutting down entrances, putting brood frames into weak hives, and stopping the robbing are all new things for me but I think I did well when I worked with the hives and had a better overview of what I was needing to do.
This book was invaluable for me this week:
The Practical Beekeeper: Beekeeping Naturally [Hardcover]

Posted by GloucesterWomanBaskets.blogspot.com at 4:25 AM