Charlie Catches a Swarm and gets his First Hive

I had told my husband Charlie that if we caught a swarm and he bought the the Hive he could have the swarm for his first beehive. We had a swarm about 10 days ago and we couldn't get it completely. You have to get the queen with it or the swarm will fly off.
I got a text while I was in a meeting at work and I then came right home at lunch.
When I first got home the swarm wasn't as pronounced. At our first attempt up the ladder we knocked the swarm, tried to get it into the bucket but they sort of all just flew out in a huge ball around us.
They then settled back down into a better swarm on a lower branch. We made a plan to cut the branch with cutters and have the entire swarm fall into the bucket.

Meanwhile, We had set up an extra hive body and a bottom board I had and covered it with some alternate materials like a cover for a plastic tote and voila we had a temporary hive. 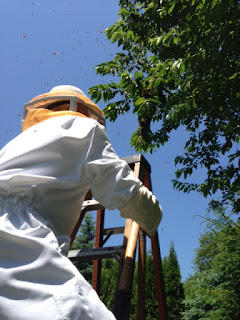 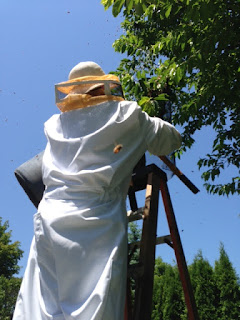 The next day Charlie went to Crystal Bee in Peabody, MA and bought me replacements for the hive body and bottom board he borrowed. So congrats to Charlie, he has been watching me have all the fun and decided he wanted to get into bee keeping too. So now we have 6 hives at Abbott Honey. WOW

Posted by GloucesterWomanBaskets.blogspot.com at 2:04 PM